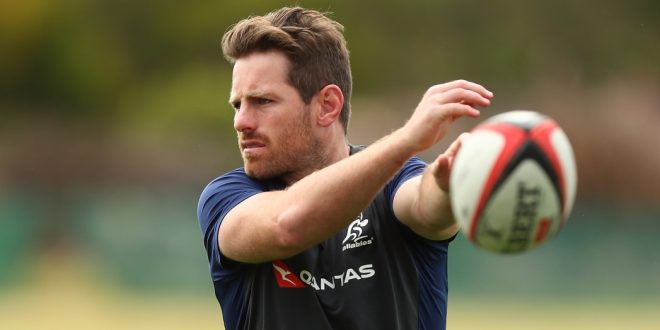 Bernard Foley was dropped Thursday in a major backline shake-up by the Wallabies, with the Springboks also ringing in the changes for a match they are both desperate to win after recent crushing Rugby Championship defeats.

Australia have lost six of their past seven games and ceded the Bledisloe Cup to New Zealand for the 16th consecutive year after a 40-12 hammering in Auckland and a 38-13 thrashing in Sydney.

The South Africans have not fared as badly but head into the clash in Brisbane on Saturday on the back of a demoralising 32-19 loss to Argentina in Mendoza.

Australia coach Michael Cheika, under mounting pressure to fix his misfiring team, has responded by relegating the ever-present Foley to the bench.

Cheika admitted it was a hard conversation telling the 60-Test veteran he was not in the starting line-up.

“Not easy, obviously, but we sat down and had a good talk about it and he’s certainly no dummy spitter, going by the way he trained today,” Cheika said.

“He’s still going to have a big part to play, finishing the game without a doubt.”

Kurtley Beale was selected to start his first Test in the No.10 jersey since 2014 and tasked with directing the show from fly-half, alongside the experienced Matt Toomua who was promoted to inside centre and will have goalkicking duties.

In a further change to the backs, Israel Folau returns after an ankle injury ruled out him out of the second Bledisloe Cup Test. The star fullback only returned to light training this week.

“I’m not looking to mix and match for the sake of it. Right today, this is the best combination,” said Cheika.

Key backrower David Pocock also defied the odds to be selected after being in doubt with a neck injury.

Brumbies lock Rory Arnold will start in the second row for his first Test of 2018 while “Tongan Thor” prop Taniela Tupou has overcome a hamstring complaint to take his place on the bench.

Australia and South Africa couldn’t be split in their two encounters last year with a 23-all draw in Perth before a 27-all draw in Bloemfontein.

Steven Kitshoff and Bongi Mbonambi form a new front row next to Frans Malherbe, while Tendai Mtawarira and Malcolm Marx are replacements.

Captain Siya Kolisi returns to the blindside flanker role after playing on the opposite side of the scrum against Argentina in Mendoza, with Pieter-Steph du Toit at openside flanker.

Warren Whiteley completes the loose trio at No.8.

Erasmus also rotated his midfield, which means a first start this year for Damian de Allende, who will resume his centre partnership with Jesse Kriel.

“We are looking for a good response on Saturday against the Wallabies and I am sure that this side will be up to the task,” said Erasmus.

“We have worked hard to rectify our errors of last week and we know the set piece and breakdown battles are going to especially be important.”