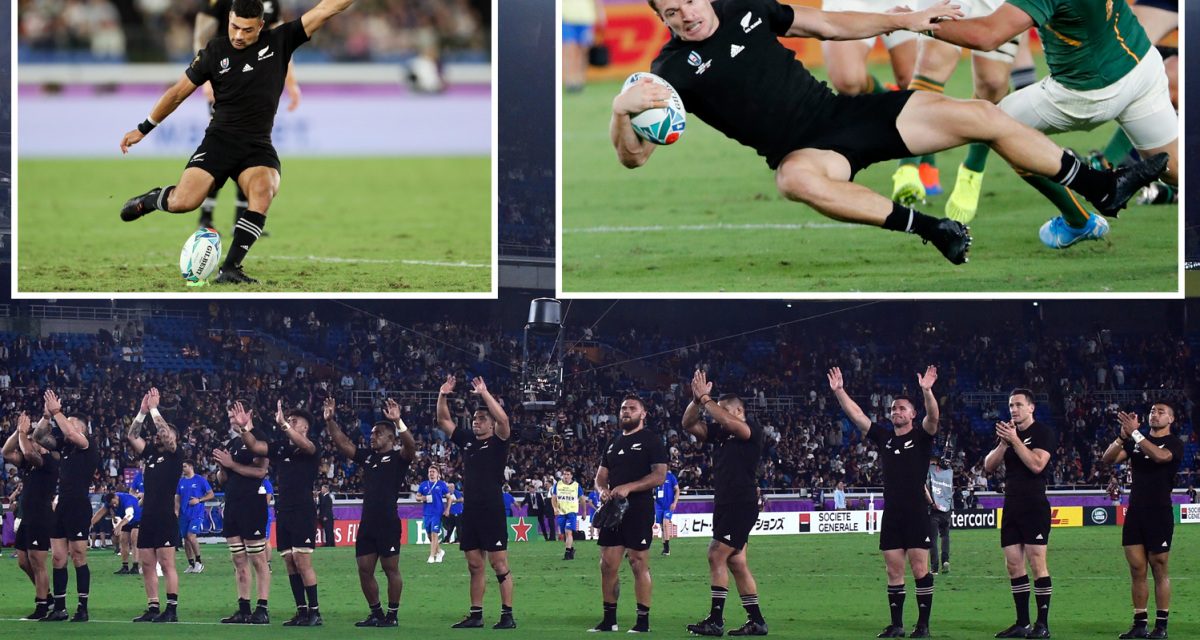 NEW ZEALAND fired an ominous warning of their grim focus to secure a record third-straight World Cup crown by grinding past South Africa 23-13 in Yokohama.

The back-to-back world champion All Blacks fended off everything a turbocharged Cheslin Kolbe and the Springboks could throw at them, powering to an opening victory at times prosaic in style – but every inch foreboding for their foes..

George Bridge and Scott Barrett bagged the New Zealand tries, with Richie Mo’unga slotting 10 points with the boot and Beauden Barrett notching a penalty of his own.

Rassie Erasmus’ Springboks tore into New Zealand from the off, appeared to have punched themselves out after 20 minutes, then rose from the canvas for another flurry of combinations after the break.

Toulouse speed merchant Kolbe stormed, stalked and danced his way through, round and over the All Blacks defence – but crucially could not quite provide a finish.

The marauding wing finish the match nursing a possible leg injury too, to heap misery on a frustrating night that had positively oozed promise from the moment he latched onto the ball for the first time in the second-half.

But boss Steve Hansen likes his All Blacks to build into tournaments, and his backline that finished the match – with Beauden Barrett at 10, Sonny Bill Williams in the centre and Ben Smith at full-back – will no doubt prove the starting combination for knockout clashes.

A watching Ireland can draw one clear conclusion from this engaging if at times sloppy contest – Joe Schmidt’s men will have to crank up their own level significantly to defeat either of these teams.

Ireland will face one of New Zealand or South Africa should they reach the quarter-finals, and after this the size of the task in store for the knockout stages has been laid bare.

For all of South Africa’s doubtless frustration in defeat however, both these teams are surely bound for the quarter-finals, whereupon their real assault on the Japan tournament will begin in earnest.

South Africa’s breakneck start rattled a curiously disjointed New Zealand. The Springboks flew off the defensive line with startling speed, hustling their way to a quick 3-0 lead thanks to a Pollard penalty.

The Blue Bulls fly-half struck the post with a second effort off the tee, failing with a regulation shot however – and after that traffic reversed.

Erasmus’ men only wound up blitzing themselves with that super-aggressive line speed. The Boks effectively ran out of steam in the first quarter.

Defending champions All Blacks got off to a perfect start[/caption]

First Makazole Mapimpi was hugely fortunate to escape a yellow card for killing the ball just five metres out, with Mo’unga banging over the penalty.

And when Scott Barrett cantered home just before the half-hour, New Zealand had total supremacy. Or so they thought.

Suddenly the crowd burst into a Mexican Wave, and Kolbe snapped to it almost in a fit of anger – and the game set on fire.

Somehow Mo’unga denied Kolbe a stunning score at the last, but the All Blacks lost possession on their counter-attack.

And flanker Du Toit flopped home to drag the Boks back into the equation.
Pollard’s conversion – and then a finely crafted and equally well-struck drop-goal – dragged Erasmus’ men to within four points of the back-to-back world champions.


When is the 2019 Rugby World Cup? Fixtures, results, teams, TV and live stream

GONE WITH THE WIND


Favourites stake claim for title with win over Springboks


All Blacks and Springboks face off in top group stage clash


What is the difference between the TMO and VAR?


Rugby World Cup: What games are live on TV and can I live stream for FREE?


Why does the South Africa national anthem have two songs?

Mo’unga quickly slotted a penalty to restore the seven-point All Black advantage, before Barrett posted a three-pointer of his own.

Kolbe bobbed, weaved and sneaked round defenders time and again at the death, but to no avail.

The Boks will hope he has not suffered a serious injury, because the fast-rising star has the potential to be the most destructive player in this competition. 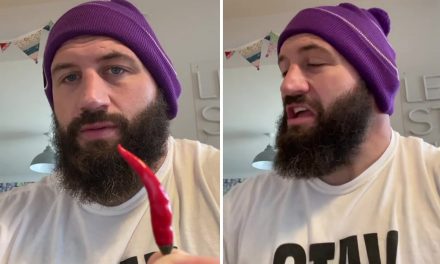 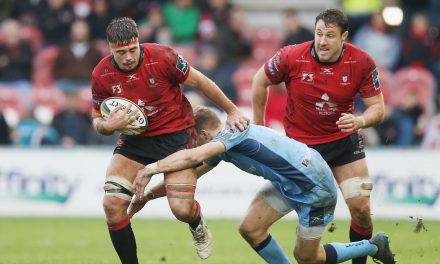 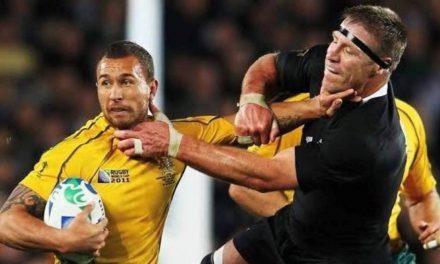