The return of Beauden Barrett: All Blacks make five changes to starting XV for second Bledisloe Cup showdown with Australia

The All Blacks team has been named to play Australia in the second Bledisloe Cup presented by Investec at Eden Park, Auckland, on Sunday 18 November.

The matchday 23 features the selection of another new All Black, with prop Alex Hodgman set to make his Test debut from the bench, while two other new All Blacks, lock Tupou Vaa’i and winger Caleb Clarke, are making their first Test start in their second Tests.

Hodgman is one of several changes in the matchday 23 forwards, with hooker Dane Coles starting and Codie Taylor on the bench, while prop Nepo Laulala returns via the bench alongside Hodgman. Lock Sam Whitelock is going through head injury assessment (HIA) protocols and was unavailable for selection, so Tupou will start alongside Patrick Tuipulotu. As well, there is a welcome return via the bench for 36-Test Scott Barrett, after a four-month injury layoff.

The Aotearoa Rugby Pod discuss who they have picked for the Healthspan Elite Performance of the Week from the first Bledisloe test between the All Blacks and the Wallabies.

In the backs, Anton Lienert-Brown has been named at centre, while Rieko Ioane will provide impact from the bench. George Bridge, who suffered a serious pectoral injury in training on Wednesday, makes way for Clarke on the left wing. Beauden Barrett resumes his position at fullback after his late withdrawal last week, with Damien McKenzie on the bench.

All Blacks Head Coach Ian Foster said: “Our preparation this week has been really good. “It was our first Test together last weekend and while there were some aspects of our game that we were pretty excited about, especially around our set piece, we didn’t get the performance that we wanted, so there has been plenty for us to work on. We need to be smarter with our ball and more focussed defensively.

His words are always like a red rag to a bullhttps://t.co/qzfwrtolHS

“The Bledisloe series is back to square one and starts again this weekend, which is exciting. It’s the last Test at home for us so there will also be massive excitement amongst our fans. There is everything to play for and we can’t wait.”

On the selection of Vaa’i and Hodgman, Foster said: “It’s a great opportunity for Tupou. We enjoyed seeing him come off the bench last weekend, he brought a lot of energy and he has settled in well

“Alex has been impressive in the training weeks. He’s mobile and he’s been making big strides in his scrummaging, so it’s a big opportunity for him in his first Test.”

The All Blacks and Australia will be playing their 168th Test against each other. New Zealand has won 115 of those matches, Australia 44 with eight draws. The All Blacks have held The Bledisloe Cup since 2003.

Round robin kick-off for Huddersfield Rugby Union at Lockwood Park 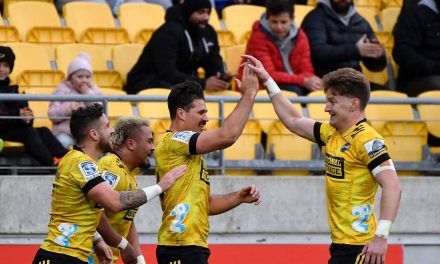