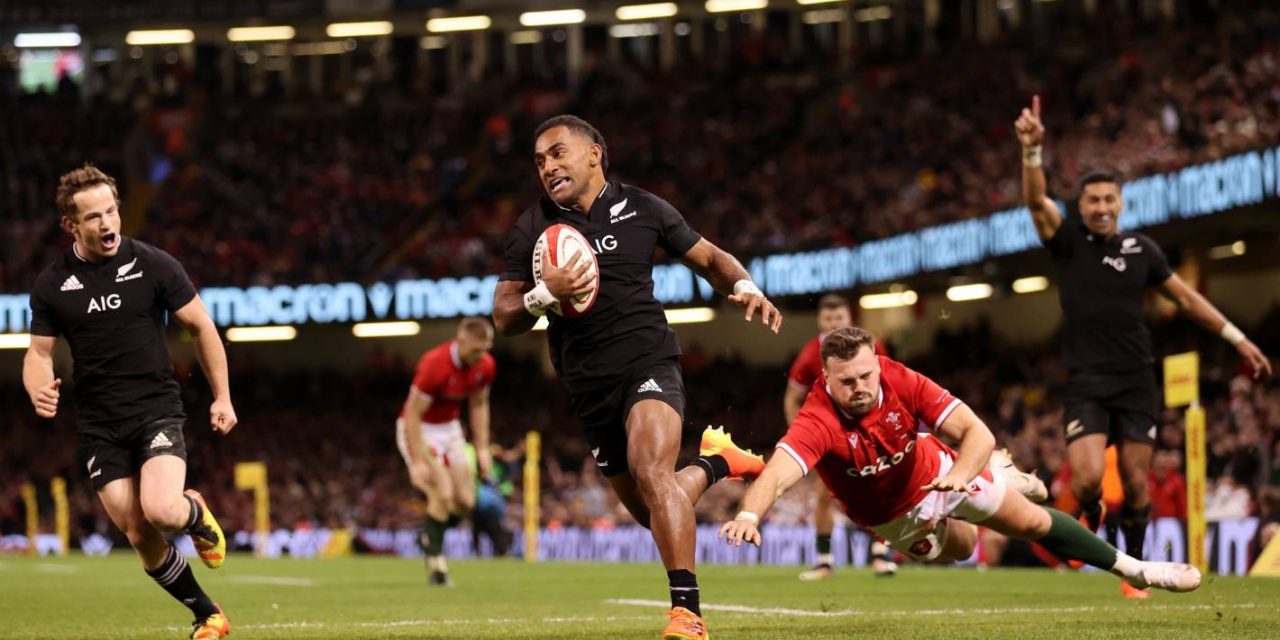 The All Blacks were widely praised for their 54-16 drubbing of an under-strength Wales in Cardiff on Saturday (Sunday morning NZ time), with Wales Online conceding the tourists had “delivered a masterclass’’.

Warren Little/Getty Images
Sevu Reece’s score was hailed as a standout in a ‘tsunami of tries’ by the All Blacks in a withering second half display against Wales in Cardiff.

Several newspapers homed in on the WRU’s decision to stage the test outside the international window, meaning coach Wayne Pivac was without his English-based players.

The Welsh Rugby Union agreed to the game because a sell-out 74,000 crowd would deliver a reported £4 million ($7.6 million) cash bonanza.

Daniel Schofield, writing in The Daily Telegraph, said the WRU “signed a Faustian pact to play this match outside the international window and the devils in black made them pay the steepest of prices for their avarice’’. He claimed the “record-equalling home defeat was not half as painful of the sight of [Wales captain] Alun Wyn Jones going off with a shoulder injury in the first half.’’

Schofield also injected a seasonal simile, saying: “On the eve of Halloween, Wales’ set piece was a horror show. Any kids short of trick or treat costume ideas could go as hooker Ryan Elias whose timing with his jumpers was off by several beats.’’

Former England and British and Irish Lions flyhalf Stuart Barnes, writing in The Times, said the WRU “got what they asked for. A full house and something in the region of £4 million for a union in dire need of some cash’’, while noting the “odds stacked against them’’.

“At no stage did it remotely look as if the hosts were about to scale that still-elusive peak under the bright Cardiff lights, particularly after losing the totemic Alun Wyn Jones to a shoulder injury inside the first quarter. The All Blacks were a speck on the horizon by the end, despite not always being at their fluent, all-dancing best.”

Matt Impey / www.photosport.nz
Will Jordan was hailed for this chip-and-chase solo try against Wales.

Kitson said Welsh fans were left to admire the brilliance of young All Black wing Will Jordan, lamenting that “every defender in the vicinity seemed to hit a patch of quicksand’’ during Jordan’s “lovely individual chip and chase score’’.

After watching the All Blacks add four tries in the final quarter, Kitson marvelled how Foster’s group, “even when they take a while to get going on soft European tracks’’ are “mighty hard to catch up the stretch’’.

That withering burst was noted by The Press Association, which termed it “a devastating finale that showcased All Blacks rugby at its finest’’.

Matt Impey/Photosport
Beauden Barrett scores his second try during his man of the match performance and 100th test match.

Planet Rugby, in its ‘five takeaways’ from the test, said: New Zealand were quite compelling at times: their speed, organisation and physicality were breathtaking, with Beauden Barrett player of the match in his 100th test, “and without question, the single most effective player on the pitch’’. The All Blacks’ electric finish was acclaimed as “as a tsunami of gas, intellect and power and based upon Saturday’s showing, there are few sides in the history of the game that would have lived with them”.

Guardian columnist Andy Bull wrote that “old friends show no mercy on Gareth Anscombe’s Wales return’’ in the Kiwi’s first test after two years on the sidelines with a knee injury.

Rui Vieira/AP
Wales Gareth Anscombe offloads in a tackle against the All Blacks in his first test after two years out with a knee injury.

Anscombe scored a five out of 10 rating from Wales Online, which said: “It was a big ask for him to face New Zealand after just three proper games since returning from long-term injury”.

Wales’ fullback Johnny McNicholl, a former Crusaders wing, got a six, with Wales Online noting “he had his moments in attack” and was “not afraid to counter’’ but he had “an occasional lapse in defence’’ and “threw an intercept pass that Beauden Barrett made the most of late on”. 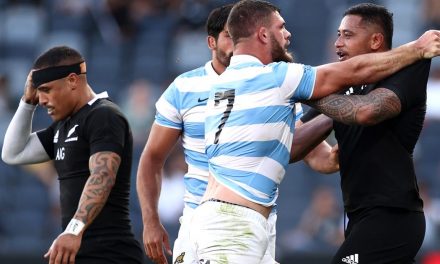